The art of high resistance grounding

What is high resistance grounding? 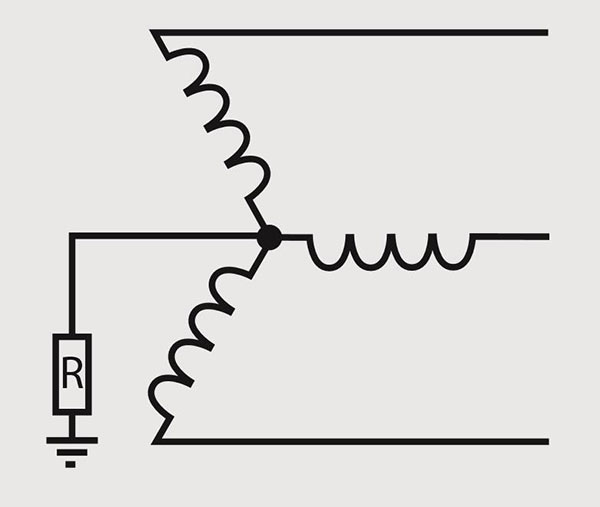 High resistance grounding (HRG) is when the neutral point of an electrical system is connected to ground through a current limiting resistor, detecting ground faults when they occur. In many applications, this type of electrical supply system can continue to operate with a ground fault, and controls ground-fault voltage on driven equipment, preventing hazards. HRG provides the best attributes of both solidly grounded and ungrounded three-phase power systems while remaining cost efficient.

Overcurrent protective devices, such as fuses and circuit breakers, even those equipped for ground-fault protection, cannot protect against ground faults in an HRG system. A suitable ground-fault detection system will detect ground-fault current in the low-ampere or milliampere range. When properly designed, such a system will also quickly locate the faulted branch feeder, switchgear or load. Tripping systems (including  second-ground-fault protection systems) can automatically disconnect the faulted circuit, allowing the rest of the system to continue to operate.

When a ground fault occurs, ground-fault current continues to flow, similar to a solidly grounded system but typically restricted to 10 A or less by the neutral-grounding resistor (NGR). This has several advantages—there is sufficient current to detect and locate ground faults; escalating point-of-fault damage is prevented; arcing ground faults cannot occur; touch potential (the voltage between equipment frame and earth) is limited to a safer level; continued operation until the system can be shut down in a controlled manner is allowed; and transient overvoltages cannot occur.

As with ungrounded systems, during a ground fault the line-to-ground voltage of the unfaulted phases increases (from line-to-neutral to line-to-line voltage), which increases the probability of a second ground fault because of increased stress on insulation. The faulted equipment should be repaired or replaced as soon as practicable.

While resistance grounding reduces the probability of a line-to-ground arc flash, making systems safer, line-to-line current and line-to-line arc-flash energy are not affected.


The NGR is a vital component

Resistance-grounded systems rely on the integrity of the NGR, which should be continuously monitored. NGR failure in open mode changes the system to an ungrounded condition, defeats current-sensing ground-fault detection and allows the possibility of a transient overvoltage; in short mode the system is solidly grounded with consequentially high prospective ground-fault current and increased arc-flash hazard. NGRs should be continuously monitored to detect these conditions and also detect ground faults (including during an NGR-open failure mode). Bender NGRM500 and NGRM700 Neutral-Grounding-Resistor Monitors provide all three required protective functions defined by the 2021 CE Code Section 10—a ground fault in the current-carrying conductors, a shorted NGR, and an open NGR.

Can avoid shutdowns in the event of a first ground fault, allowing the system to continue to operate until an orderly shutdown can be scheduled.

These advantages are noted in IEEE Std 3003.1: Recommended Practice for System Grounding of Industrial and Commercial Power Systems, and its predecessor publication 142-2007, the Green book.

Solidly grounded systems are common, but they are susceptible to arc-flash hazards and uncontrolled shutdown due to ground faults. Low-resistance grounding is sometimes used for medium-voltage systems. Ungrounded systems are used in some industries and countries, and have some advantages including the ability to operate with a ground fault. Bender has monitoring solutions for each of these power system types.

Many industries require high availability and put high importance on protection for equipment and personnel safety. It is very common for these industries to use high resistance grounded power systems. A few examples are: